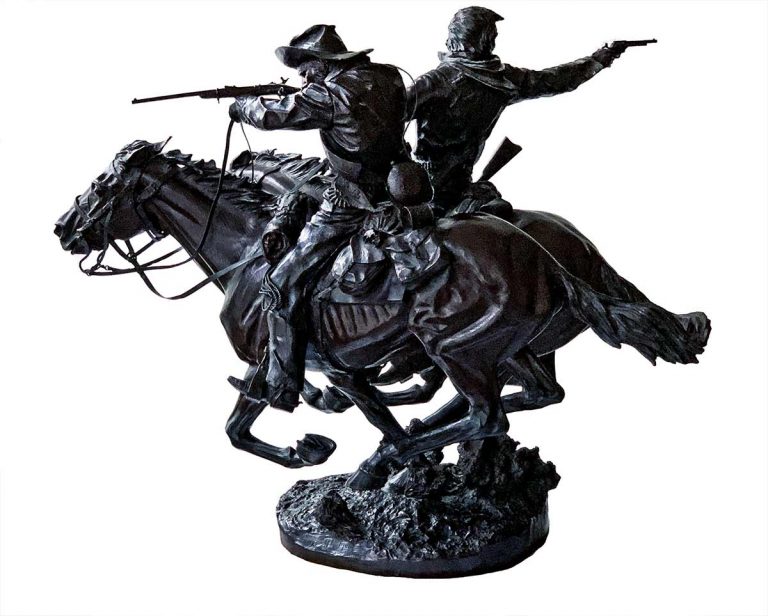 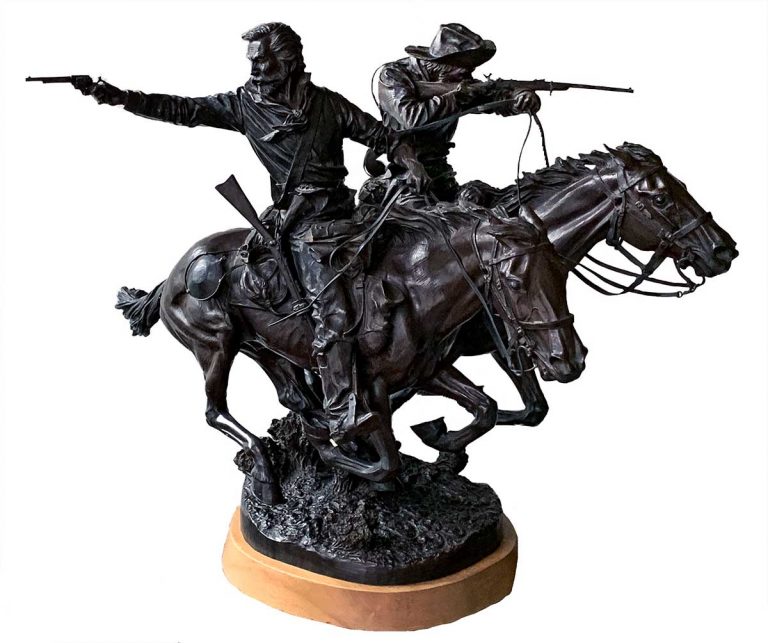 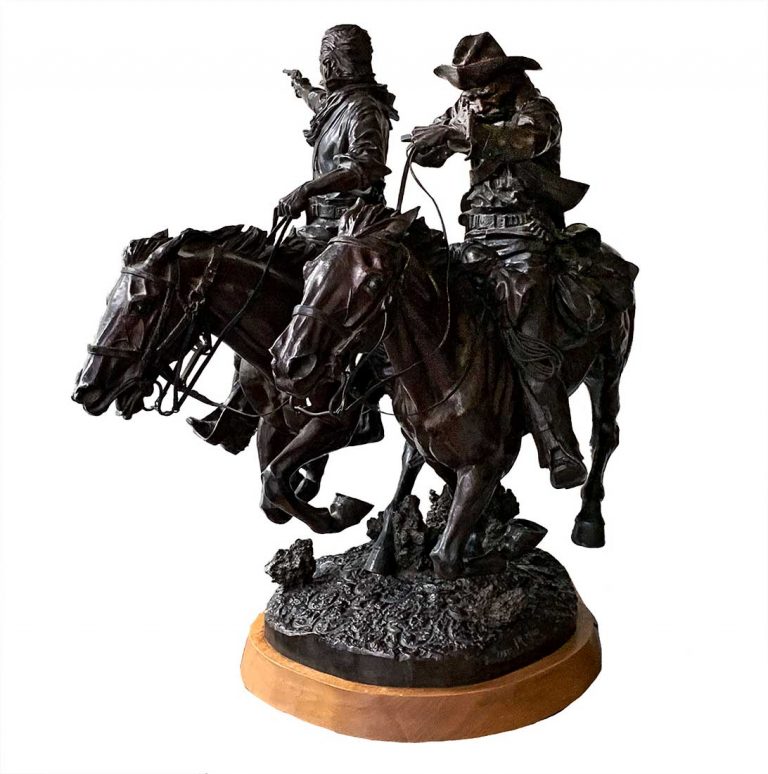 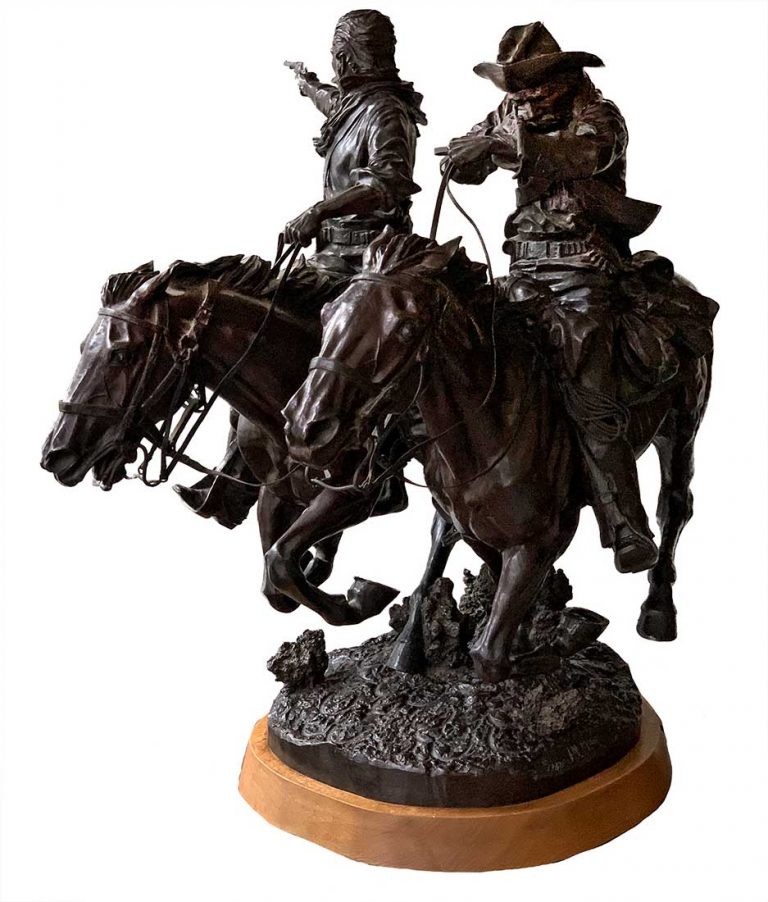 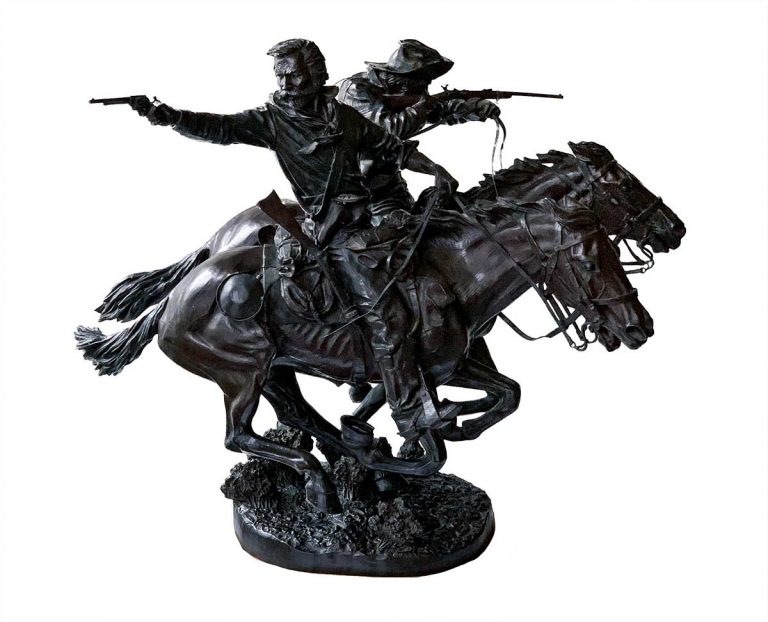 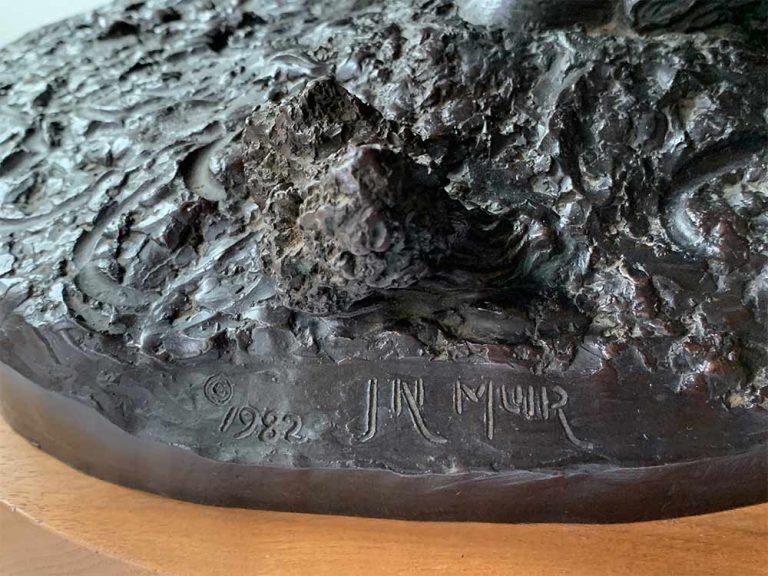 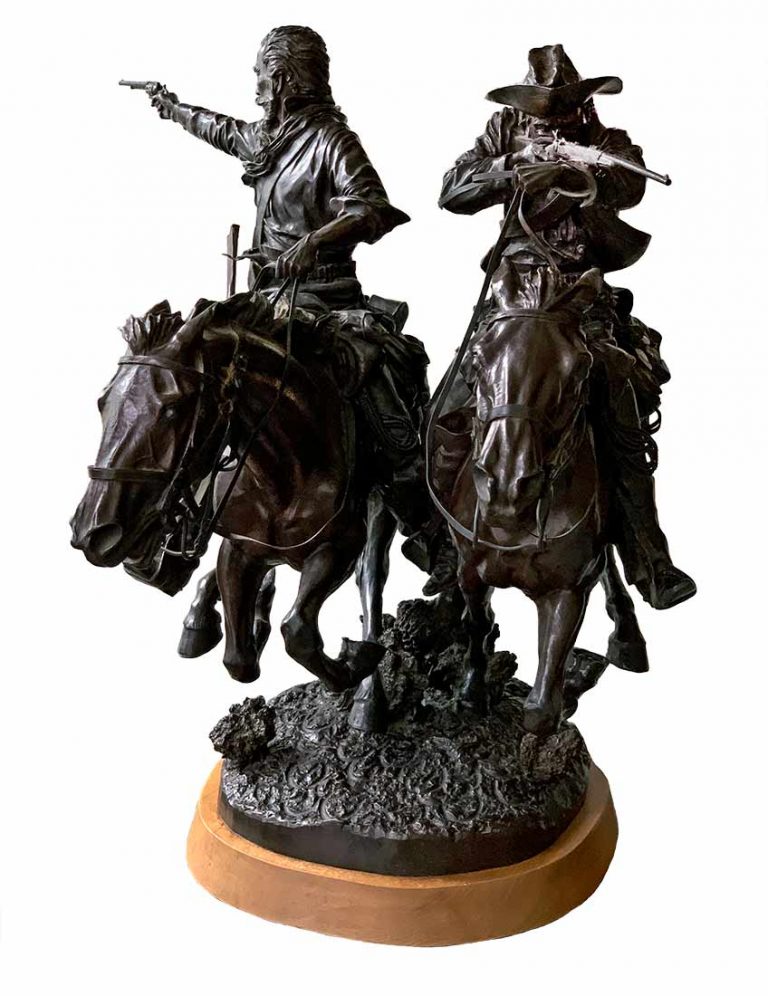 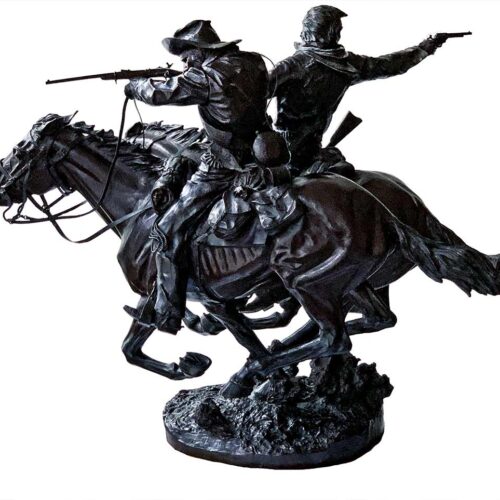 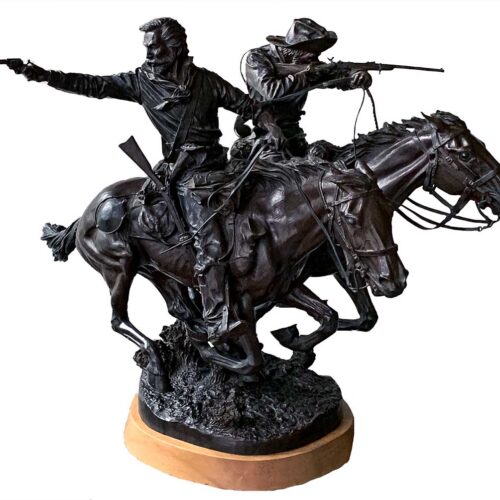 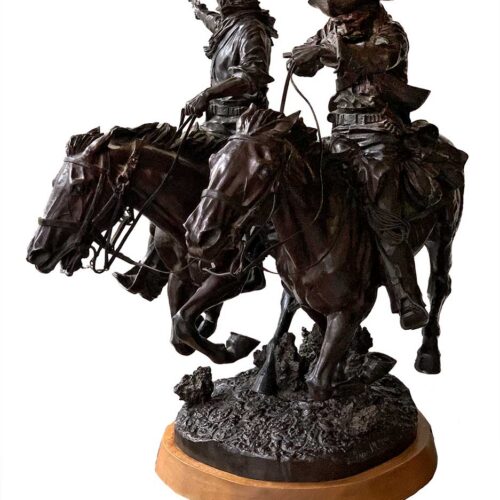 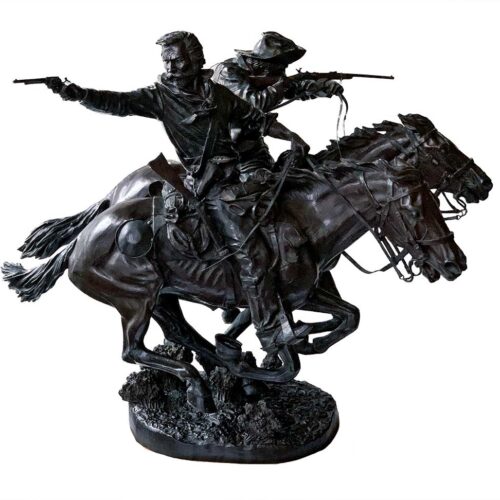 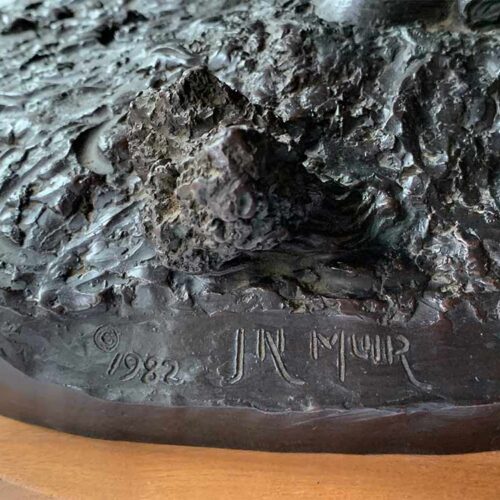 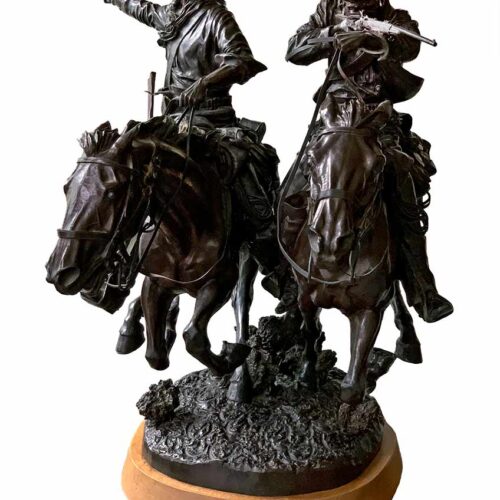 Circumstance or blunder? To some 630 officers and men pitted suddenly against no fewer than 3000 savage Sioux and Cheyenne warriors along the banks of the Little Big Horn, it made little difference. Troopers were paid $13.00 a month to fight Indians, not to question orders or tactics. It could be left to later armchair, self-styled, tacticians to “Kick dead Lions.” When lives hang in the balance, the sweaty taste of fear is much more real than theories.

Trapped between treacherous Indians and even more treacherous politicians, the soldier in blue dutifully bore the burden. For 264 men of the 7th U.S. Cavalry, the reward of a grateful nation was as shallow as their battlefield graves; the recognized failure of a pacifist Indian Policy came too late. In combat formation of “Column of Two’s” each man covered his side and protected his side and thereby protected his comrade’s blindside.” The appearance, uniforms, weapons, and equipment are exactly as thy most probably were on that day-June 25 1876 the battle of Little Big Horn.

The men were armed with the 1873 Colt Single Action Army revolver in .45 caliber with 24 rounds of ammunition carried in their pockets, or in 12-15 round loops they added to the left side of their cartridge belts (as does the man on the left.) Holsters were still Civil War type. Additionally, they carried the 1873 Springfield Carbine in 45/70 cal. Suspended from a carbine sling by a snap swivel and thrust through a “socket” attached to the off-side girth “D” ring when not in use (as the man on the right.) One hundred rounds were carried on the campaign: 40 in issue waist belts converted by the men into a cartridge or “prairie belts” and the remaining 60 rounds in the near-side (left) saddle pocket (bag.) All men carried some type of knife for defense, general use, or to dislodge stuck shells from their carbines in heat of battle.

Sabres, having long since proved of little value in Indian fighting, were not carried (although they may for once have been useful.)

It was a customary habit for the men to let their beards grow while on a campaign. Likewise, since on the frontier fighting ability was all-important, personal appearance mattered little. There were no enforced uniform regulations in the field. In fact, the uniforms of the 7th were a hodgepodge of left-over, and often modified, Civil War items, later issues and civilian garb. The man on the left wears a modified Civil War “shell” jacket and the 1872 Andrews hat (designed to hook up like a Chapeau de bra and one of the poorest quality hats ever issued.) He is a corporal and, thus, a 1/2″ yellow stripe on his trousers (popular ideas to the contrary, only NCO’s and officers were ever authorized yellow stripes on their trousers. Enlisted men, such as the man on the right, never had yellow stripes. Both men are wearing leftover Civil War pullover flannel shirts and wool trousers with reinforced seats (either as issued or usually with canvas or old flour sacks.) Their boots are the 1875 high top pattern for mounted men. Regulations prescribed the trousers to be worn over top the boots when in garrison, either with or without toot straps, while on campaign most preferred to tuck them into the boots. Spurs are still of the Civil War pattern. As it was a very hot day, the man on the right had removed his recent issue M1874 blouse (jacket) and strapped it over his overcoat on the pommel. As his hat was probably one of the many straw hats the men had bought from a sutler (private merchant) for twenty-five cents when they left the Yellowstone river camp three days earlier, it has blown off (ever try to ride a horse at a dead run and keep a straw hat on your head even without having to shoot at Indians?) He is also wearing large bandanna of any color except yellow, as there never was such a thing. Both men still have their overcoats rolled and strapped to the pommel, though many of the men had discarded theirs on the march.

The saddles are Civil War vintage that have been modified to conform to the new (1874) pattern concerning rigging and leather covering, except that the hoods have generally been removed from the wooden stirrups as well as the sweat leathers. The saddle pockets, as they were called then, are still the Civil War type, as are the halter, bridle and bit, even though “officially” these items had all been obsolete for a couple of years.

Both carry their 2-3 days’ rations in painted cloth “haversacks” strapped over their cantles, and their canteens still have the infantry-type, long linen carrying sling. The tin cups are the large Civil War issue type. The nose bag, strapped to the off-side (right) pommel ring and used for grooming the horse, contains currycomb and brush. Grain is carried in a “forage sack” strapped to the cantle. (Issued on the march three days earlier with 12 lbs. Of grain. At the rate of 2-3 lbs. Per day, there would have been generally only half to one-fourth left, which accounts for the relatively small cantle roll.) Strapped over the forage sack are “side-lines” used in conjunction with the lariat and picket pins (tied to the near-side pommel ring) to stake the horse out to graze on the often treeless prairie.

As with the 7th Cavalry’s commander was a superb horseman, the regiment was well known for having some of the finest mounts in the service. Many were Kentucky thoroughbreds acquired when the regiment had been stationed there. These horses are wearing the preferred “Burden” type of issue horseshoe. A spare fitted front and rear shoe were carried in the off-side saddle pocket.

The horses are nearly exhausted from near-steady riding for the preceding several days and no rest to speak of for horses or men the previous night. Fear is magnified for both with exhaustion. The final disaster to the five companies with the General was precipitated by the panic among the led horses and their running off with the men’s spare ammunition as well as their last hope of escape.

It is said that in all men are the seeds of both coward and hero and, when faced with mortal fear, no one knows which shall come forth. So it was also on this day in 1876. Most, to their undying glory, chose courage — a sign of courage born of hopeless desperation and bred by a determination to sell their lives dearly. In the face of courage, there is no room left for fear, and even death loses its sting.

It is to “Courage” that this piece is dedicated.

A Link to the James Muir Blog, CLICK HERE