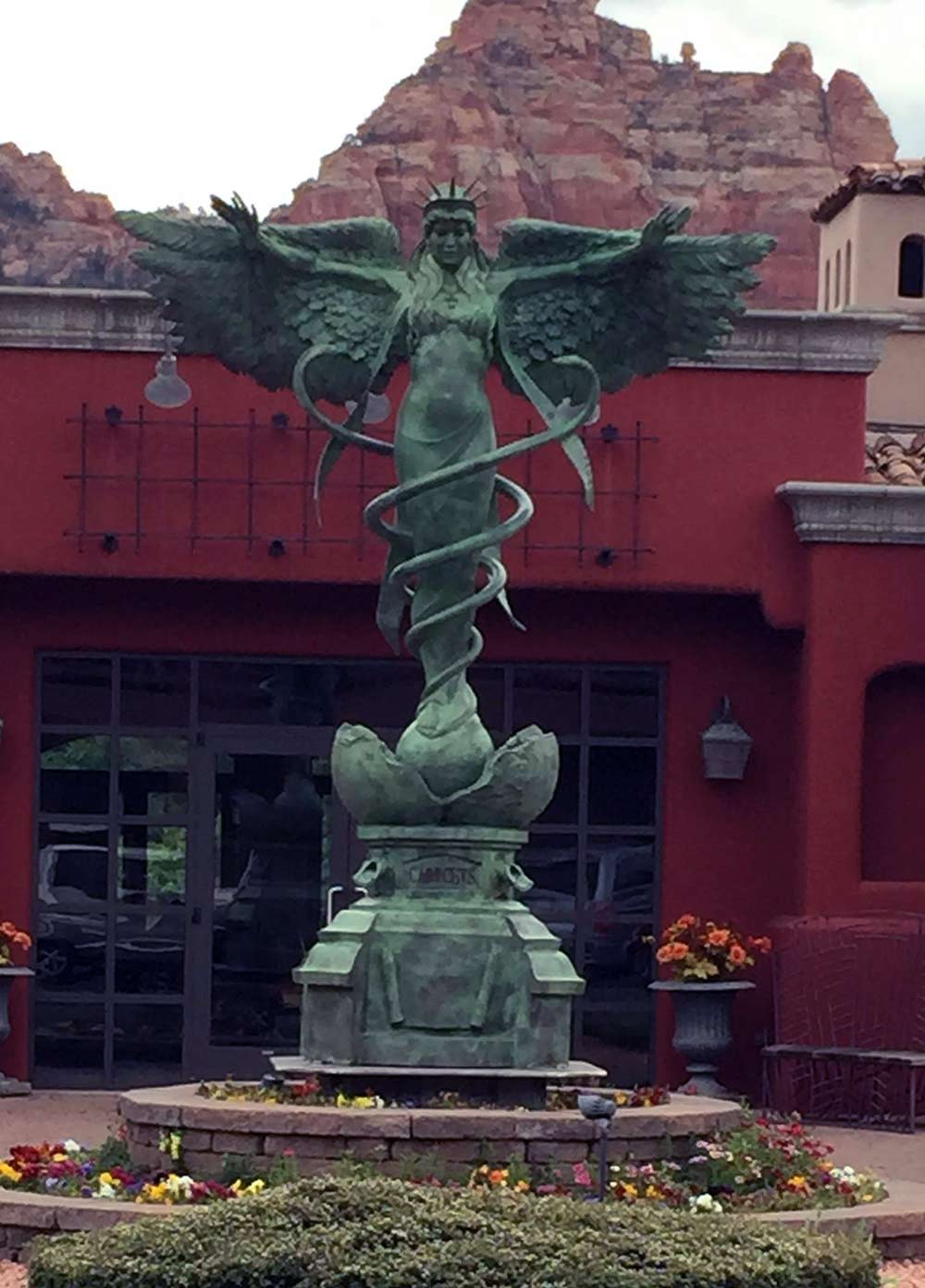 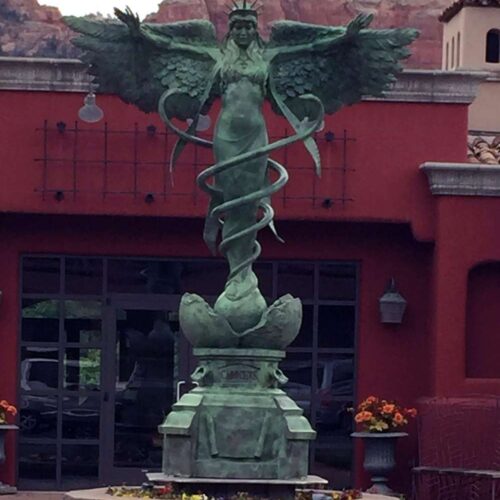 Caduceus monumental bronze sculpture – “Caduceus“, recognized as a universal medical symbol, in this bronze representation by James N. Muir has become an Angel of Healing bringing love and peace upon the earth and all of its inhabitants. She is 12 feet high with a 9-foot wingspan and includes fountain capabilities.

“My goal is to see these “Seven Ladies on Seven Continents” transcending individual differences to become a unifying symbol for the universal kinship of humanity and all creation in a physical metaphor representing the spiritual connection between all things. To help bring the healing power of love into the earth, ushering in a new era of peace.”
James Nathan Muir

This is unique in it’s beautiful Verde patina and the fact that it is already cast at older foundry pricing.

“Recognized internationally as the universal symbol of Medicine, the “Caduceus” has become an Angel of Healing rising, like the mythical Phoenix heralding a New Era of harmony and peace, to heal the Earth and all its inhabitants with Love as the Master Physician.”

The word “Caduceus” (Ka-doo’-seus) originates from the Greek “karykeion”, itself derived from “karyx” meaning a herald’s badge or staff. In latin, the word, “Caduceum” means practically the same. The caduceus was worn or displayed by Roman surgeons, official messengers, and by military emissaries to signify a cessation of hostilities on the battlefield. It symbolized the herald of the gods, –Mercury in Rome and Hermes in Greece–who carried a winged wand on which were coiled two serpents, symbolizing male and female. Legend was that Hermes came upon two serpents at war and, in his beguiling manner placed a staff, which Aesculapius had given him (also a symbol used in Medicine), between them whereupon entwining with it, they ceased warring and began loving one another thus expressing unity, fertility, and peace.

While Hermes was sometimes associated with more roguish elements, in the third century, along with being a guardian of health, he came to be connected with theology and philosophy. Later, in the sixteenth century, though not himself a physician, chemistry, pharmacy, and medicine came under his domain as well. In 2000 B.C., records indicate the physician to the Sumerian King used the symbol of a staff entwined with two serpents. In 1856, it was selected as the emblem of the U.S. Marine Hospital Service, the Public Health Service in 1871, The U.S. Army Medical Corps in 1902, then the Dental Corps, Veterinary Corps, Army Nursing Corps, and the Sanitary Corps. The American Medical Association officially employed it in 1912. (from “The Virtual Hospital” by Clifford C. Snyder, M.D.).

At this critical juncture in world history, the Caduceus seems a uniquely appropriate symbol for the redirection of hatred and conflict by the staff of a Higher Power to produce unification, harmony, and peace on earth. As “Quo Vadis” depicts our upward spiritual journey, “Caduceus” expresses the initial spiritual flow of energy from Creator to Creation. Also like “Quo Vadis”, the symbologies run so deep and complex that, other than a brief overview, the allegories are best left to the personal insight of each individual.

The seven-rayed crown or tiara in the form of a nurse’s cap and the crown of Liberty (physical and spiritual) also refers to the seven energy centers of the body as well as to the seven ancient Hermetic causes of “dis-ease.” The latter being physical: (1) misuse of faculty, organ or function, (2) presence of foreign substances, impurities or obstructions in the system, and superphysical: (3) unhealthy (negative) mental attitudes (thoughts), (4) imbalance (disharmony) between the physical and spiritual nature, (5) internal spiritual influences, (6) external spiritual influences, (7) astrological energy influences. More directly, the seven rays issue forth the likewise ancient healing energies to flow down the seven ringlets of hair upon a disparate world: (1) practical allopathic medicine, (2) naturopathic medicine of diet, exercise and daily healthful habits, (3) homeopathic medicine of nature’s herbs, (4) vibration and color, (5) amulets, (6) invocations, and (7) prayer, which cures all but requires faith.

The jewel on her forehead, over the mystical third or spiritual eye, represents vision with full intuitive insight and acuity into the esoteric world of healing and metaphysical reality. The “sun-moon” of the earrings are traditional symbols for the “doctor-patient” relationship but herein reflect the perfect balance of the fully spiritualized energy of the “Yang” and the “Yin”, mind-heart symbols. At her back, the feather of Truth (Ma’at) is tied at the juncture where the two polarities of her braids become one in completeness. The “ANKH”, the “key” or “staff” of life is an ancient healing device pre-dating Egypt’s symbolic use by thousands of years. Here it is combined with the equally ancient “Rose Croix” (cross) of spiritual unfoldment over a divine trinity of leaves, along with three nails signifying the sacrifice of the lower self (Mind, Emotional Body, Soul) for the resurrection of the true Higher Self. The jewel rests upon her breast to radiate down healing energy in the form of rainwater flowing forth through her open exposed heart.

The nine-foot wings (the number nine being the number of Unconditional Universal Love as well as “Mankind”) with their twenty-four primary feathers, expand to shield, protect and uplift a disparate and fearful world. The Lady’s hands raised in blessing, with one and two fingers raised to signify the two universal commandments also for the twin signs for “Love” and “Peace.” Her left-hand bears the wedding ring of perfect union with the Creator, a marriage of Heaven and Earth, while her right-hand bears the ancient signature ring of –in service to the Creator through service to His creation.

In a whirlwind of energy, her hair ribbons radiate to the ends of the earth: the front ribbons with twelve suns symbolic of the months of the solar year and the higher, universal life cycle this world of humanity in transiting, the rear ribbons with one hundred and forty-four (twelve-square) stars symbolizing a new enlightened level of awareness. The bow at the top, with one and seven stars, suggests the crest of the mythical “Phoenix” bird as she rises out of the ashes of the old-world thinking of mankind, and, with acute vision, sees and comprehends the truth in all things. The “Ourobaros”, the serpent swallowing its tail in the eternal resurrection and renewal like the Phoenix herself, continues its never-ending cycle around her crown.

Whirling up in their own double vortex of energy rise the twin serpents of the Caduceus. Like the serpents which the Hopi legends say reside at the earth’s poles awaiting the time to be re-awakened into activity, they are kept in balance by her wisdom in a symbiotic relationship of spiritual/physical, heart/head energies and form the double helix of the human DNA molecule. The python represents the “spiritual” while the cobra symbolizes the “body”; both in harmony provide a balance point or fulcrum for the “mind” to bring forth peace and healing.

The old earth symbolically, and literally, is falling away to reveal the golden orb of a new world of enlightenment, harmony and peace. America is transformed into the genesis of that New Era, tasked to responsibly lead the way into a brighter and better future for all. If she fails in this regeneration, then her fate is sealed and the Phoenix shall rise from the ashes of her funeral pyre.

The base establishes the orientation of the four quarters with the center, the sacred point, or “Sanctum Sanctorum” being the earth herself. While we, as humans, must heal the earth, the earth must first heal us, humans. The perfect elixir of the mythical “philosopher’s stone” combined the four elements in ideal balance to heal any “dis-ease.” This magic elixir flows forth gentle as the rain from the spouts of each element — Fire, Water, Air, Earth–through Truth and Peace to the four corners of the earth. The true physician can only heal through the power of love and, though the lessons will be hard ones, the earth will teach us love-love for this sacred living planet, love for all creation, and perhaps even love for ourselves. Then, and only then, will we take our rightful place as master physicians to share the promise of Caduceus’ enigmatic dolphin in healing the earth and being the true stewards of all creation. As the most important symbol of all, the benevolent, compassionate expression of the lady herself, is to remind us all that perfect healing must begin with perfect love and, even in the darkest hour of the darkest night of the soul, Love will be the Master Physician.

A Link to the James Muir Blog, CLICK HERE