Shalah Perkins Shalah's Art is unique in that she has placed an original poem on a plaque that is located in the base of the sculpture. I wish to create art that moves man to his very soul, makes him laugh in delight, shows him love and a world of joy.--Shalah Born in Del Norte, Colorado in 1939, Shalah has spent the last forty-six years ranching in the southeast corner of Colorado. Their ranch lies in canyon country that is steeped in the history of the Old West. Mother of two daughters, Shalah and her husband Jess have been partners in running their cattle ranch. Whether she's building fences, branding cattle or delivering calves, there's never a challenge she's unwilling to face. A twice cancer survivor, she has become strong in her faith in God and this is reflected in her work. Also Shalah is a product of her environment, in her sculpture you sense the understandable pride and adulation that she feels for the natural beauty and the heritage that surrounds her. Her work is in public and corporate collections such as banks, museums and outdoor parks. One of her pieces named Kindred Spirits is on display at the Governor's Residence in the State of Wyoming. At outdoor sites her art is displayed at: Cheyenne WY, her fountain "Wishful Thinkin" is in front of the Old West Museum &. in Estes Park, CO on the Big Thompson River , and the City of Blackhawk, CO. Her piece of two children "The Wonder of It All" is in Springfield , CO at the Springfield Memorial Park and Pueblo, CO at the Pueblo River Walk., Wisdom at The Arkansas State University, Newport, AR. She has been the recipient of the award "Best of Show" several times over the years. In the year 2002 she received Best of Show & Best of Sculpture , "Equinox Juried Art Show", Springfield, CO. In 2000 Best of Show & People's Choice at the Harvest of the Arts, Walsh, CO, and Honorable Mention at the Castle Rock Artfest, Castle Rock, CO. In 1998 she received the award "The Ben Johnson Working Cowboy Award" given to artist who has achieved exceptional accomplishment as both a working cowboy and artist. Her art has been featured on the cover of the Rocky Mountain Quarter Horse, Cattle Guard ,the High Plains Journal and the Pueblo Chieftain. She has studied under; Grant Speed, Herb Mignery, Fritz White, Lincoln Fox and Peter Rubino. 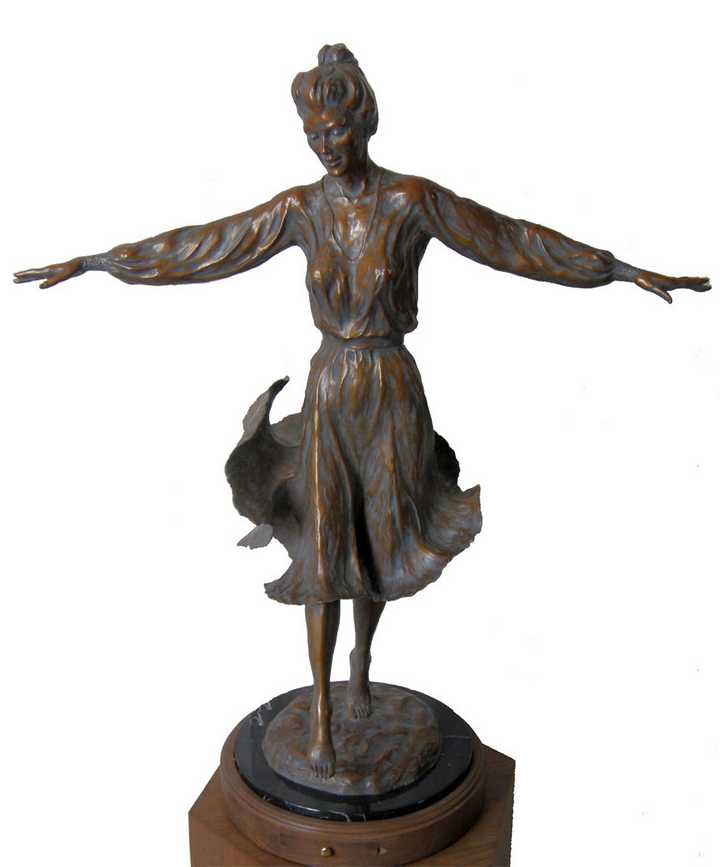 Shalah Perkins • Joy in the Morning