Isidore Jules Bonheur (Bordeaux 15 May 1827 – 10 November 1901 Paris), best known as one of the 19th century's most distinguished French animalier sculptors. Bonheur began his career as an artist working with his elder sister Rosa Bonheur in the studio of their father, drawing instructor Raymond Bonheur. Initially working as a painter, Isidore Jules Bonheur made his Salon debut in 1848. Born in Bordeaux, Jules was the third child of Christine Dorotheé Sophie Marquis (1797–1833), a musician, and Oscar-Raymond Bonheur (1796–1849) (a landscape and portrait painter and an early adherent of Saint-Simonianism, a Christian-socialist sect that promoted the education of women alongside men). Jules was the brother of Auguste Bonheur and Rosa Bonheur (1822–1899). "It is I who first gave modeling and sculpture lessons to my brother Isidore" (Rosa Bonheur) In Bordeaux his father had been friends with Francisco Goya who was living there in exile. In 1828 Bonheur moved to Paris with his mother and brothers and sister, his father having gone ahead of them to establish a residence and income. He studied painting at first, enrolling in 1849 at the École nationale supérieure des Beaux-Arts, though he made his debut at the Salon (Paris) in 1848 (a Cavalier nègre attaqué par une lionne, plaster, and a drawing of the same subject) and exhibited regularly until 1899. He won medals in 1859, 1865, 1869, took part in the Exposition Universelle (1855), exhibited in London at the Royal Academy of Arts in the 1870s, where he gained great success with equine figures and groups, and won the coveted Médaille d'Or (gold medal) with a sculpture entitled Cavalier Louis XV at the Exposition Universelle (1889). He won a silver medal at l'Exposition [Historique?] de Madrid in 1892, a gold medal at the Exposition Internationale d'Anvers (1894). Also in 1894, Bonheur was awarded the status of Knight in the Order of the Immaculate Conception of Vila Viçosa (Cavaleiro da Ordem de Nossa Senhora da Conceição de Vila Viçosa), Portugal. In 1895 he was named Chevalier (Knight) of the Order of Isabella the Catholic, Spain. He was named Chevalier (Knight) of the Legion of Honour on 7 May 1895, decorated 24 May, and breveted 18 September 1895, Paris. He had given up painting in favor of sculpture early on in his career, though he was noted primarily for his small animalier groups. His studio (atelier) was located at l'Impasse du Moulin Joly, on the corner of rue du Faubourg-du-Temple in Paris. Isidore Bonheur found a greater market for his work in the mid-nineteenth century in England versus France. In 1870 he gained representation at the Royal Academy and produced a variety of work that catered to English collectors. Many of his bronzes were edited by the founder Hippolyte Peyrol, his uncle by marriage. The Peyrol casts for both Rosa and Isidore Bonheur are exceptionally well executed, which suggests a strong working relationship between the founder and sculptor. There is little doubt that Isidore Bonheur was an acute observer of nature; his animals were not anthropomorphized, but modelled to catch movement or posture characteristic of the particular species. He achieved this most successfully with his sculptures of horses, which are usually depicted as relaxed rather than spirited, and which are among his most renowned works. All information on Isidore Jules Bonheur in the above bio/life/info is believed to be accurate 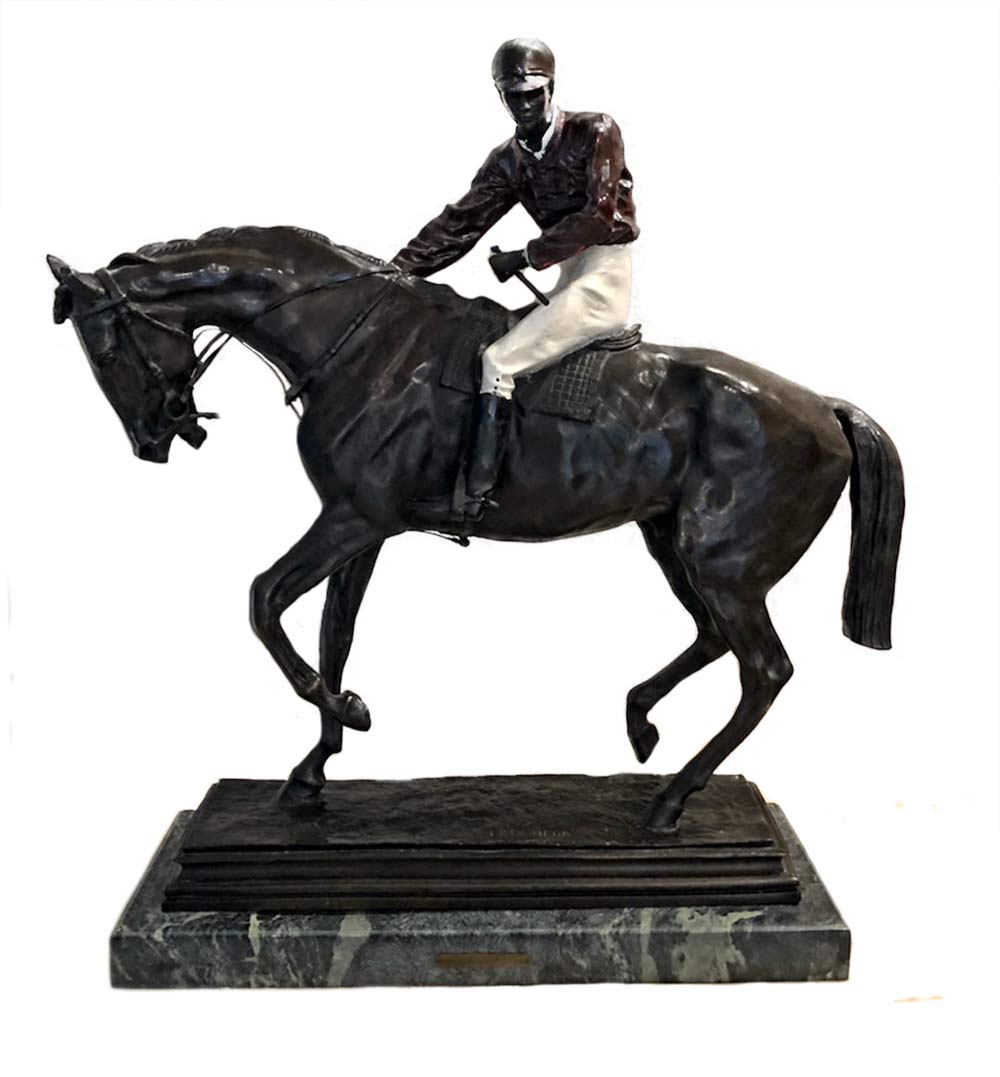