About Gene and Rebecca Tobey

Gene & Rebecca Tobey For 21 years, Gene and Rebecca Tobey worked together as husband and wife and artistic partners. Having created a distinctive style and a unique artistic signature, the Tobey design is instantly recognizable. Best known for their creations of ceramic and bronze sculptures of abstracted animal forms, bear, buffalo, elk and other majestic animals stand in dynamic, timeless attitudes. Layered in symbols, each sculpture becomes a story within a story to be read and explored time and time again by the viewer. Each piece is a sculptural statement about the dominant personality of the animal, and magic occurs as the sculpture's surface becomes a canvas upon which the Tobeys have carved, drawn, painted and scratched sgraffito drawings of other animals, human figures, scenes of starry night skies, mountain ranges, and symbols and geometric shapes. Beautifully patinated surfaces lend depth and color to the sculpture. In 2006, Gene Tobey passed away after battling leukemia. Inside this website, viewers can gain some insight into Gene and Rebecca's creative and collaborative process and the creations forged during their two-decade partnership. Rebecca lives in Santa Fe, New Mexico and continues the couple's legacy and creation and spirit. Gene Tobey - 1945-2006 Gene Tobey of Santa Fe and formerly of Port Aransas and Mason, Texas, passed away Wednesday January 4, 2006 in a hospital in Albuquerque following a long term illness. He was 60. Gene was born May 26, 1945 in Utah to James and Annabelle Tobey. Gene was one of the most well-known of today's southwestern sculptors. He is best known for stylized animal sculptures with his trademark line drawings incised into the surface. Tobey began his career as a sculptor/potter and taught sculpture, pottery and three-dimensional design at Casper Community College in Wyoming and Linn-Benton Community College in Albany, Oregon. In 1985, he and Rebecca married and blended their five children into a family. He began collaborating with Rebecca shortly after their marriage, showing in art galleries across the United States. Together they pioneered large, brightly colored ceramic animals, and in the mid 90s their work shifted to bronze sculptures with lively, innovative patinas. Now, their work ranges from miniature animals to monumental bronzes like, the 15-foot-tall bear at Baylor University Law School. Gene's family and friends miss his humor, great sense of adventure, passion for nature, and his soul. But his art lives on, and his spirit soars in the work that remains. All of the above information is from the Tobey Studios website. 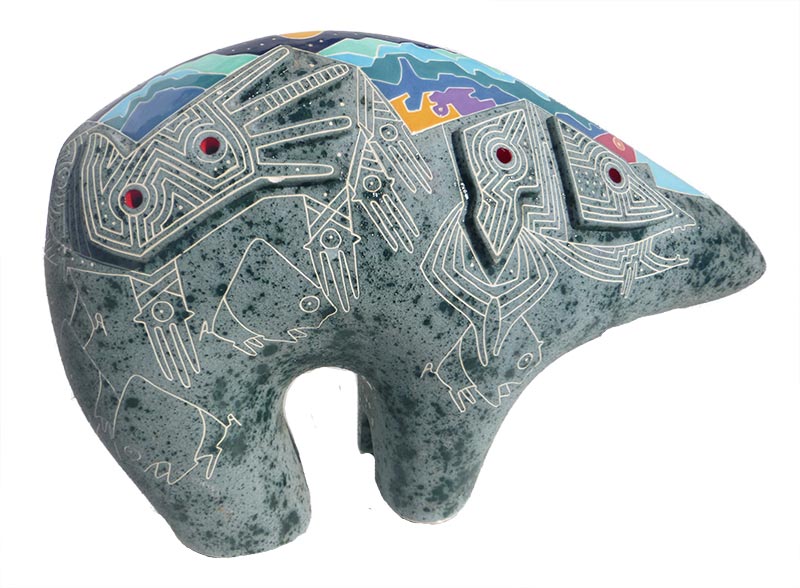